In 2015, I published an extended series of “financial stop-doing” posts, suggesting what investors could STOP doing, if they wanted to START building more durable wealth. Almost three years ago to the day – on September 8, 2015 – my “stop-doing” post began as follows:

“Recently, the market has been playing right into an important addition to our financial “STOP Doing” list: Stop trying to correct for market corrections.”

Time has passed, but one thing has remained the same: As current overall markets have again been ticking upward for quite a while, I’m again hearing investors fretting over when the fall will arrive, and whether they should try to get out ahead of it. Since my response remains the same today as it was then, I’ll reprint it for your re-viewing pleasure, updated to reflect the most current available data.

Is There Going to Be a Market Correction?

The subject is not a new one to us. In August 2014 and again in 2015, we posted this Q&A: “Is there going to be a market correction (and, if yes, then what)? In light of current events, we’ve now updated that post with current year-end information.

Just as it takes no special skill to predict some days of sub-zero temperatures this winter, we were not being prescient when we said that we would probably experience a correction sooner or later. One need only consider abundantly available evidence to recognize that, viewed seasonally, the market frequently “corrects” itself, sometimes dramatically. It’s only when we take the long view that we can see the market’s overall upward movement through the years. 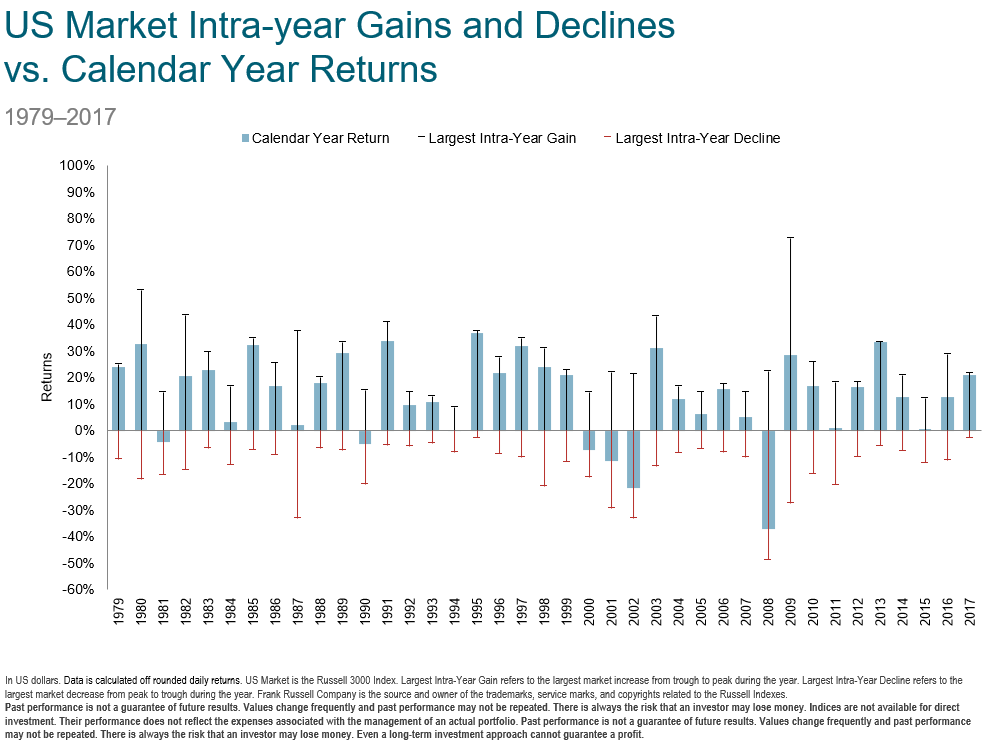 For example, consider this Dimensional Fund Advisors slide depicting the US stock market’s gains and losses during the past 35 years. The narrow lines illustrate wide swings of maximum gains and losses in any given year. The blue bars show the year-end gains and losses after the dust has settled. Clearly, far more years ended up than down, for overall abundant growth.

This illustration is substantiated by similar findings from JP Morgan. According to their data, covering 1980–2017, the average intra-year decline of US stocks (measured by the S&P 500) was 13.8% per year, but the annual returns were positive more than 76 percent of the time, in 29 out of those 38 years.

But first we’d like to challenge the word “correction.” We prefer to think of price volatility as simply part of doing business in the market to begin with. Ever the individual to tell it like it is, Dimensional Fund Advisor’s retired executive Dan Wheeler had this to say in one of his classic blog posts, “The Spinning ‘Talking Heads’”:

“I never have liked the term ‘correction’ to explain a move in the market indices. By definition it implies that the market ‘got it wrong,’ being under or overvalued. So looking at the market as I write this, I guess that over the past few days the market ‘over corrected’ and has now ‘corrected’ the ‘correction.’ You can see how this starts to become a bit silly, but it also shows how little credibility should be given to the talking heads and journalists posing as experts.”

From this perspective, investors are best advised to stop seeking to correct their own investments in the face of market corrections … if that’s what you want to call them.

Ready to start maximizing the probability of achieving your financial dreams?